The outlook of childhood cancer has improved enormously in the developed world with 5 year survival overall ~80%. Unfortunately we have not been unable to translate this success to much of the developing world including India. Treatment related mortality and relapse are important causes of treatment failure. However they are overshadowed by the widespread prevalence of treatment refusal and abandonment which are the main causes of treatment failure. These are as much a social problem as they are a medical problem. Any attempts to improve the outlook of children with cancer in a country like India has to have at its core strategies to deal with this problem. Such successful models are now being increasingly reported from Central and South America. Most notable has been the reduction of treatment abandonment in children with acute leukaemia as a result of the “twinning programs” between St. Jude Children’s Research Hospital in Memphis USA and Instituto Materno Infantil de Pernambuco in Recife, Brazil (see graph below) 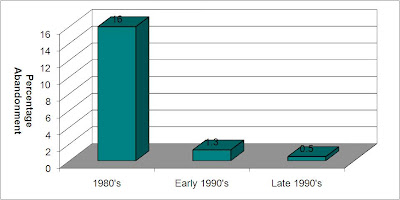 Attempts have been made in the past to contact the children and families of those who abandon treatment. There are a very few studies looking at this and their dissemination has been limited to scientific proceedings. The recently published paper from Indonesia (Ref - Sitaresmi et al, Psycho-Oncology, April 2010) is the first extensive analysis of child and parent attitudes and behaviour to explain this complex problem. The authors conducted home-visits to interview families of 37 acute leukaemia patients, diagnosed between January 2004 and August 2007, who refused or abandoned treatment. There was no relation of abandonment with age, risk stratification of leukaemia, class of hospitalization (marker of economic status), parental education level and travel time. Girls abandoned slightly more often but this difference did not reach statistical significance.

Financial difficulties and a belief in the incurability of acute leukemia were the leading reasons given by parents for abandoning treatment. Additionally, treatment-related toxicity, painful procedures performed with inadequate analgesia and sedation, inadequate communication provided by health care providers and transportation difficulties were contributing reasons.

Posted by Ramandeep Arora at 21:27