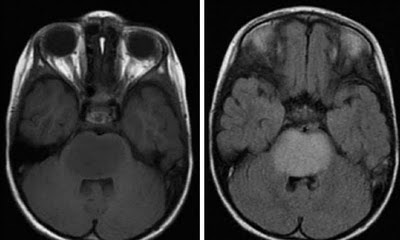 Around 10-15% of all childhood tumours of the brain are in the brain-stem. A majority of these are diffuse and infiltrating lesions of the pons called Diffuse Intrinsic Pontine Glioma (DIPG). Surgical removal of these tumours is not feasible and focal radiation in combination with experimental chemo/biologic therapeutic agents is the mainstay of treatment. Current outcomes across the world are dismal overall survival less than 10 to 15%.
In a recently published report from Tata Memorial Hospital in Mumbai, clinicians describe the outcome of 20 children with DIPG who were treated with focal radiotherapy (54 Gy in 30 fractions over 6 weeks) along with oral temozolomide during and after radiotherapy (Ref - Jalali et al, Int J Radiat Oncol Biol Phys, May 2010). This was done as a phase 2 feasibility clinical trial. Although the treatment was generally fairly well tolerated, only 35% of children were alive at 12 months after diagnosis and only 6% after 18 months.
In summary, this is one of the very few case-series on DIPG from India and the dismal outcome of these children is similar to that reported from rest of the world. I am fascinated by the complete absence of treatment refusal and abandonment in these group of patients. In a cancer, where treatment is intense and the outcome generally fatal, refusal/abandonment of treatment should theoretically be a relatively common occurrence.
Posted by Ramandeep Arora at 12:57